Have I really nothing better to write about than new printer cartridges? Well, probably yes, but that's life, Gilligan. Who cares. Chuck Chew Squares and Fallible Stiffness Toes.

I bought new printer cartridges after having an inkless printer for a couple years. Shows how much I print - almost never. Now I can print. Phew, such a relief, since I pretty much never print anything. My life is now 0.00000000000000000083 percent more complete.

I received all sorts of violent insults and threats because I have recently been publishing my ugly face on my blog too much. This picture should solve some of those problems.

I used my new graphics software, Serif DrawPlus X3 to compose this fantastic image that is beyond compare. Woa, even Golgastein the Improvite is impressed. The next sonic boom created by a fighter jet that happens somewhere in the world... is hereby dedicated to the coolness factor of this imagery. 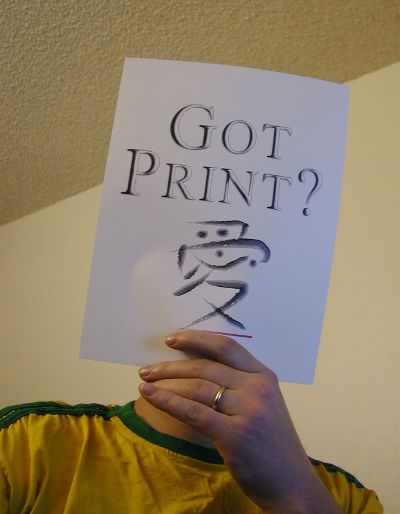 Oops, I almost forgot. The reason I wrote this is because I acquired the cartridges in a new way. I've tried various ink replenishing gullets (methods) before. I've forked out big bucks to buy new cartridges (no one should ever do that). I've bought a new printer, which is considerably cheaper than buying new cartridges, and the printer usually comes with cartridges (sick America we live in where such things are encouraged). I've even bought ink refill kits and tried to do it myself. That was a disaster! Ink everywhere - never again.

This time I looked at the ink refill stores in the area. I priced one out on the phone. Driven by curiosity, I looked online to see if there was a way to buy them cheaper. Sure enough, there are a ton of places selling "used" (no idea what that means... like a used cheeseburger or diaper) or "refurbished" ink cartridges. I looked on Amazon and found a seller that easily outpriced the local ink refill shop even with the shipping cost. A week or so later, and now I have my ink. Works great!

A week without ink for some people would be catastrophic. For me, it was like "who cares?" It might be six months before I have need to print something. But when I do need it, it'll be sitting there, drying into a solid block and clogging my print heads. Yippee!