We Are Gideon's Battle Lamps

Lately I've been thinking a lot about spherical orbs of light. I've become a spiritual warrior of light for Christ Jesus and God Almighty Most High. Surely my invisible companions are angelic captains who wield weapons of divine power! Whether it's accurate or not, sometimes when I pray specifically against the forces of darkness, I picture the spiritual world. I see our spirits as Christians shining brightly, filled with the Light of Christ. Then, when we pray or intercede, a sphere of light surrounds us, as a shield (yet a weapon of some sort, drowning out the darkness within it's "range"). As we pray more intently, it grows even larger, so the power of our influence is more intense and widespread.

I know, it's just an imaginary vision. I don't actually know what the spiritual world "looks like". But these sort of thoughts help me visualize the power given us in Christ to vanquish the darkness. There is no force too great that has not been put under His feet. All power and authority has been given to Jesus Christ. He is pleased to give us this power by proxy (or rather by Himself who lives within us and is our Life!). In Jesus name no power of darkness can prevail! Holy God Almighty, He's awesome! His dominion and kingdom have no bounds! We will rip a wound in the deep. By the Word of His mouth, light will come from darkness. Wisdom and love will vanquish sin and death! Jesus Christ is Lord.

I see this world as a dark and empty palette. There's all sorts of evil running here and there spreading disease, death, destruction and deception. We are the light of the world. A city on a hill cannot be hidden. We are salt and light. Lately I've been picturing us as spheres of light, and so I decided to whip up a quick 3D rendering which sort of represents the image in my mind.

I remembered the image of Gideon and his army of 300 going out to meet Midian's thousands. God proved His power by fighting the battle for the Israelites. Part of the story tells of the men carrying lamps and jars - probably to appear as a larger number spread across a hillside, approaching the enemy's camp. This image of lights spread across a hill in darkness also inspired this image. We wage an equally dangerous battle as Gideon did, and the odds are not in our favor anymore than they were in his. Yet the Lord our God promises to give us the strength we need. I believe He will fight our battles alongside us. Mighty is His arm! He will crush the endless flow, He will put an end to the onslaught. No one will escape, not one. This is the Lord of Hosts, the One who empowers us by His Spirit. Let's wage war with our spherical orbs of light! Darkness beware, the King of Ages is near, and His servants are gearing up for battle.

I think of an image like this too, when I visualize Christians spread across a city or the globe. If enough of us step out and "do stuff" for the Kingdom, we can light up the entire landscape, our shine zones fully overlapping! This is one of the things I think when I go out to my Outdoor Chapel. I hope others will do something similar. Though it could simply mean being more intentional about one's interactions at work or school. It doesn't need to be the chapel sort of thing. I'm not even sure what that's all about yet. I'm just doing it - for whatever reason... mainly to meet with God. Yet I believe it will somehow have an effect on the community as well. 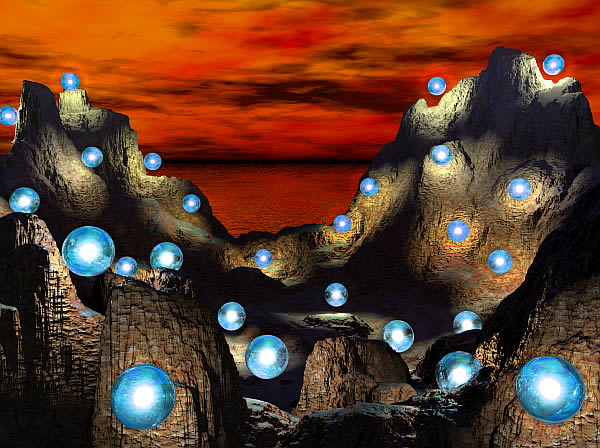