Warning: Contains Significant Movie Spoilers!
Don't read unless you have already watched it, or don't care if I tell all!

From the beginning I have had very mixed feelings about the new Superman movie. After watching it on Monday, I'm still not entirely sure what to think. Early on I criticized the final choice of Brandon Routh in the lead role. While I stand with that specific scrutiny, I am surprised at how Routh visually filled the roll in the end. He is definitely too young and has a plastic-boy appearance, but there are many times in the movie where I found myself quite forgetful of these flaws. In reality, the magic of film can make just about any person look decent in blue, red and yellow. Though some of the early choices would have been ghastly - such as Brendan Fraser (George of the Jungle, Mummy) and Nicolas Cage (National Treasure, Lord of War).

I was a bit nervous going to see the movie because it hasn't initially received many solid, positive reviews. Even one of my good friends gave it a thumbs down or "So so" at best. I went to the theater not expecting a whole lot.

If it wasn't for my keen interest in Superman and other comic book heroes (if not completely ludicrous and pathetic, like Joel Schumacher's Batman movies), it would have been easy to dislike the new Superman movie. I can't really explain what caused me to leave the theater thinking, "That was a cool movie!". It is so full of flaws and weaknesses after giving it a second thought and reading what several others have expressed.

The Definite Flaws in
Superman Returns 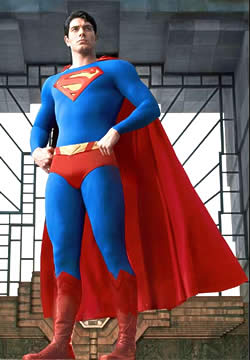 The Finer Points of
Superman Returns

Somehow, even though the flaws outnumber the redeeming qualities in Superman Returns, I am still able to respond with "I liked it", as a final synopsis. Sorry if my analysis and conclusion disappoint some of you die-hard fans! Batman was/is my favorite anyway. Superman was never better than second. By the way, I don't think of superheroes as gods, just fun and imaginative stories. The Creator's powers, character, personality and abilities far outweigh them all. He is not fictional to boot! Plus, He chose to give up His infinitude and live a lowly human life in order to reach us - A fact that no made up story can best!