Yet Another Graphics Software Takeover 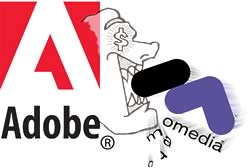 If you read my blog consistently you will know that I generally am not fond of software companies merging and buying each other out. Read my ranting about Corel's foolhardy buyouts here: "What Was I Talking About Again? Serif and Corel Ramblings". I'm a little late in reporting, but I have been aware of Adobe's takeover of Macromedia for some time now.

I feel that rarely does a software buy out benefit the end user (like me). Usually it just means less direct communication and concern for the customer. It seems the real motive behind such takeovers is profit (One could argue that all business decisions work their way down to a profit motive). Someone gets the idea that "We could make some serious money off this deal", and they go for it. I don't think the first concern is ever "Our customers would really benefit from this move". Such excuses might be mentioned as an afterthought when executives are interviewed by the media, but the reasoning behind these "benefits" is mostly contrived after the dollar signs fade from their eyes.

Personally, I don't really like any software company that buys out competitors that begin to show signs of innovation. It seems Adobe has adopted Corel's ideology that no one can be allowed to compete. I'm actually surprised Corel didn't beat Adobe to the punch in aquiring Macromedia... perhaps Corel has spread itself too thin and no longer has the necessary funds for more ridiculous mergers. And, of course, I'm sure so much money is offered in these deals that the smaller competing companies simply cannot refuse. It's just too bad no one has enough strong ideals to refuse offers of exorbitant money and continue producing ground-breaking yet affordable software.

Macromedia was producing some incredibly innovative software with very unique feature sets that Adobe, Corel or any other graphics big boy could only dream of coming up with (or copycat later). Now that Macromedia is to be absorbed into the Adobe landscape, innovation of this sort could fade. If the creativity flow does not stop, it will at least come with a higher price tag. Adobe is notorious for charging preposterous prices for their software, and I'm sure whatever titles result from this takeover will be no exception.

As a web designer I am curious what the implications of this enormous takover will be for the field. Adobe's PDF document-sharing format and former Macromedia's Flash format are two of the biggest influences on web content, second perhaps only to the standards-recommending W3C committee. Currently, I concern myself more with standards-compliant markup, using XHTML, CSS and Javascript. Perhaps by some impossible stroke of corruption, Adobe will buy W3C and dictate the entire world of web content. That would really suck! In that case, Adobe's greed and market share would rival Microsoft's. Nonetheless, this Macromedia takeover will affect the future of the internet in one way or the other, and I guess I just have to roll with the punches, like it or not.