Unleashed is a breakout performance by Jet Li

Jet Li pitches a ground-breaking performance alongside Morgan Freeman and Bob Hoskins in Unleashed (2005) (aka "Danny the Dog"). It is a rare occasion to see Jet take on a significantly dramatic role, and his performance is more than adequate in this brutal yet touching story. The basic plot line follows a mobster who employs a savage collection agency in the form of a collared, dog-like slave called Danny played by Jet Li. Danny is a one-man army - trained from birth to be a heartless killer, without a shred of conscience or independent thought. Bart, his self-declared "uncle", keeps him caged up with nothing to learn from, save a children's pictoral alphabet book and a teddy bear.

Bart is no uncle, however, and uses Danny as an attack dog to do his dirty work. Jet Li portrays his character perfectly, one of the few action stars with enough acting ability to convincingly exhibit an untouchable and violent force, yet with a look of naive innocence. From a dramatic critique, I believe this to be one of Jet's best performances. I have always admired his acting ability. I believe he is similar to Jim Carrey in that both are best in their specialties: Jim in comedy and Jet in martial arts and action. Nevertheless, both are able to conjure up the faces and postures necessary to deliver a convincing and sobering performance.

While the plot to Unleashed is not without flaw or inconsistency, it is a unique and provocative idea. The movie is unfortunately cluttered with bad language and the occasional objectionable scene and fairly extreme violence. Jet Li demonstrates a rare fighting style remarkably unlike that of any other of his movies. Instead of perfectly calculated, beautiful movements, the strikes and movements and stunts are far more rugged and barbarous. The fights appeared real, as could be found on the street, with not a punch pulled. It was pretty hard to watch some of the scenes (I turned away during the sensual trash), but the violent behavior fit in with the narrative. 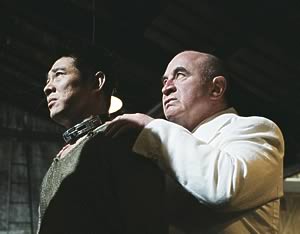 The power of this film was the authenticity of the performances. Bob Hoskins brilliantly plays the part of Bart: a hedonistic, commanding and shuddersome master. His hateful treatment of the simple-minded Danny is vile, yet it shines the light of clear comparison to a spiritual counterpart. All throughout Sam is a clear depiction of Satan and his unending assault on mankind. His spite for Danney closely resembles what I imagine Satan has for human souls. He holds them captive in a blind life, allowing them to only see the hopeless and controlled images he desires. His pleasure is to make individuals feel so incapable or unworthy of freedom and value that they have no choice but to follow his destructive suggestions. 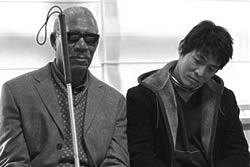 Sam's love and expression of interest introduce the path to freedom

Danny is saved from his endless oppression by way of a blind piano-tuning stranger: Sam, played by Morgan Freeman. Freeman is a brilliant actor - one of the best of all time. He almost invariably portrays in his films a character with a huge heart (Batman Begins, Glory, Bruce Almighty, and many others). Sam and his step-daughter Victoria show Danny a type of love he has never known and blindly and unconditionally accept him as part of their family.

Light and dark or good and evil are not only represented by people in this film, but in objects. Through most of the movie, Danny wears a rigid metal dog collar. When his master removes the collar, he is transformed into a killing machine. The collar seems to have the magical power to hold him captive to a physhotic pattern of control. This is the dark object; the light one, however, is a piano. One day, while on a collection route with his cruel master, Danny encounters and is strangely drawn to a blind piano maestro. He longs to hear and play the sound of the piano, as if some instinctive attraction to the object and its output exists. It is the piano, along with the familiar love of Sam and Victoria, that frees Danny from his prison. Further comparisons could be made to the piano tuning and Christian growth. As the Master (God) works us more and more and we submit ourselves to His will, our melody becomes more in tune, and the resulting sound rivals that of Mozart in its beauty and depth.

This object oriented symbolism can be directly tied to Christian concepts as well, though the analogy is not perfect. The collar and the evil master can represent sin and the resulting slavery of mankind to a sin nature. The music and love of Danny's adopted family represent God and His people's redeeming love for the lost. Through the loving actions of Sam and Victoria, Danny discovers his true self and by a process is unleashed from his bondage and taught how to really live as well as how to reject the lies of his former master. He is now a slave to love, a love that promises to never let go. This unending compassion is undeserved and unexpected, but it is real and powerful just the same.

Though the imagery and language of this movie warrant a serious warning if not outright avoidance of this movie, I must admit it had a pretty powerful message. Probably none of these spiritual connections were intentional, but I'm thankful for having noticed them.