Amid this horrible disaster in the southern states as the result of hurricane katrina, some very valid ethical questions have been posed. Is it ever okay to loot? Is there such thing as the "state of nature", where conditions are so dire that taking things in order to survive becomes an acceptable action? These are very hard questions, and I won't pretend to know the proper answers. I will just give my personal opinion on the matter. 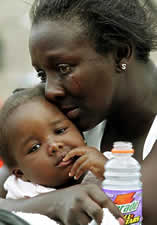 It is very clear and obvious that the situation is so extreme in Louisiana that many people will die without food, clean water and medical supplies. These 3 commodities are now precious and rare since most of the city is under water. I know that I personally would not feel bad at all taking any one of these three things to provide for my family. I think that since stealing is not a personal weakness or temptation of mine, I would keep a cool head about it and act boldly. If my family was in danger or in poor health, I would of course instinctively seek out food and shelter for them. And in a place where everyone is seeking the same, I think this would be a natural and fine behavior. The problem of course is that most people would not keep a cool head about it, and they would violently horde found goods, even killing those who try to grab a piece for themselves. Therefore, in looking for resources, much caution would need to be employed, and a humble demeanor would be necessary. Obviously if the store owner was still around, it would be necessary to reason with him and plead for help. Violent takeovers would be totally unethical and clear cases of stealing. If the store owner refused to help, I think he would be unethical and merciless, but his decision should be honored just the same.

I guess if I were in that situation, I would take the needed supplies, but perhaps make a mental note to attempt to repay the debt to the store after everything had settled. Of course, all my worldly possessions would be left behind in a flooded house, so it might be difficult to repay. Perhaps a plead for mercy from a store owner who also lost everything, including all his store contents, would be appropriate.

Perhaps the best solution is that some military or police peacekeepers could be strategically placed near stores that contain valuable supplies. They could be armed with automatic weapons for their own protection and last option peace keeping purposes. They could offer vouchers or bags of limited size for people to fill with supplies. If problems arise, they could use their weapons to calm the situation. Even this solution is not very good, for every person would cry out for more provision, and violence would almost surely take over. Ideally the government and charitable organizations will simply step in and freely give whatever is needed to keep people alive. The scale of the problem is so large, however, it would not be an easy task. 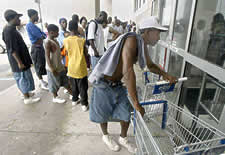 I think it would be a horrible shame for all the food and water that do exist in these flooded stores to spoil and be useless for no one. It is perhaps more ethical to take them and use them to save a life - even one's own life - rather than let them spoil and save no one. Can you imagine the shame someone would feel, knowing that he defended his store, letting no one take anything, and to see them die at his feet with hands extended? What a waste. It is clear that basically this whole area will be wasted, especially since everyone is supposed to be evacuating and leaving the area for a couple months. In that time, all the food will spoil, especially since there is absolutely no electricity in the area and the streets are filled with sewage and a host of other unspeakable filth. If someone, while desperately trying to leave the area, finds something that can aid them in their survival and commute to safer ground, then by all means they should take it. Unfortunately there can be no legislation of order in this process, and each person would have to tread lightly and avoid threatening situations. 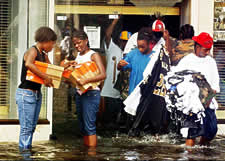 Perhaps the sickest scenario that is developing as part of the aftermath of this disaster is the anarchy of the vile with their immoral abuse of "ethical" looting and other violent behavior. There are those who are stealing simply to gain financially or materially, taking objects that have nothing to do with survival. This is totally ridiculous and necessitates the use of completely different ethical considerations. These people should be stopped immediately, at gunpoint from cool-headed authorities, if necessary. There are those who are raping poor survivors who trying to make it to safety. Other darkened fiends are robbing gun stores and using the weapons to fend off rescue forces and figures of authority. These enemies of state don't make sense and are guilty of national treason, and by act of mercy to those who are honestly seeking life, they should meet a swift fate if not to be reasoned with. Ah, what a complicated situation. Too much for this simple mind. Good grief, how do the authorities deal with it? The only hope seems to be for each to do his best to peaceably survive and strive to receive mercy and provision from others who have something to give. Here is a time when humility and generosity must meet hand-in-hand to rule the day.