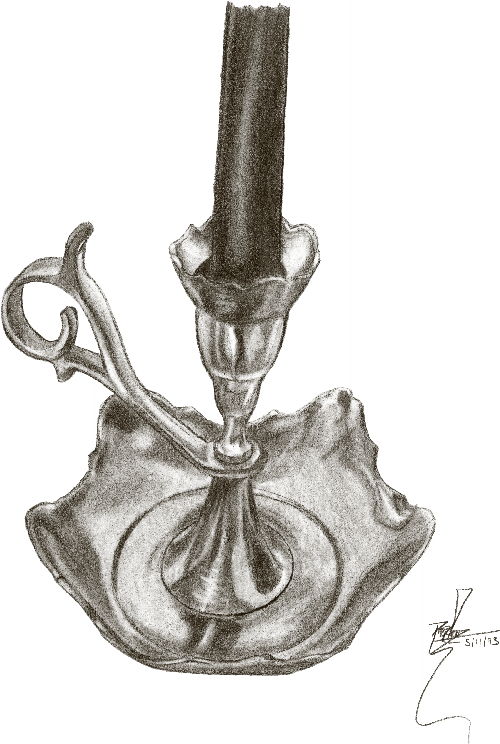 In high school I took a very casual art class. I don't honestly remember being instructed in any techniques, but we were encouraged to keep a sketchbook. In fact, it was a requirement to have so many sketches, don't remember how many. While the sketchbook felt entirely like a chore to me, some of my better still life sketches come from those early years. There are probably more sketches in that one book than the total combined number I have completed in the decades since!

I think this candlestick sketch was one of those I did for the high school sketchbook. Obviously it was before I learned to strategize positioning and framing of objects! Not sure I ever learned that actually.

Capturing all the reflective nuances in the metal was difficult. Surely some details were left out. Problem is, you can't move to get a closer look once you have started because all the reflections change when you do that! My vision isn't the greatest either. When I look at the perfect metallic renderings of the old Dutch masters I'm completely amazed. They have far more patience than I do. Did they also use telescopes from across the room to see the details from afar?

The illusion of realism probably would have been greatly served by adding a background. To this day I have great difficulty doing that. By the time I have finished the subject, my patience has grown thin. Leaving the background blank or at best scribbling in some junk is about all I can gather the will for.