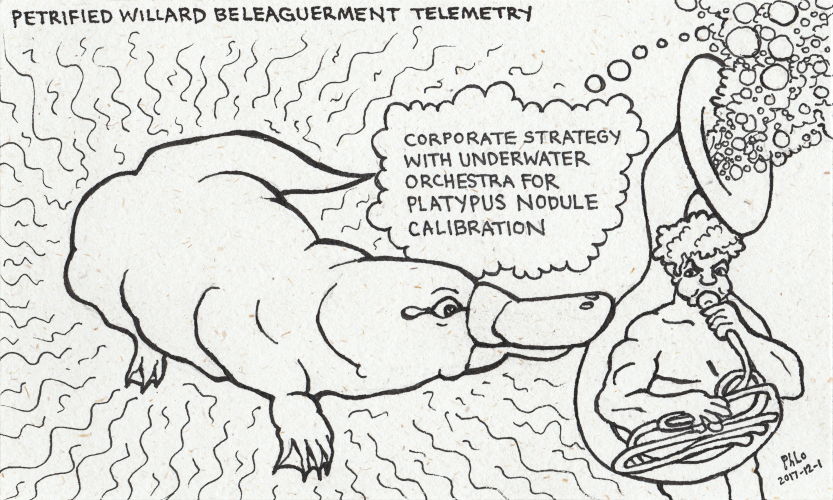 There comes a time in every man's life when urges develop to wander away from the comforts of family and home in order to explore one's primal hunter gatherer instincts. Larry Appleton was unsettled with his life as a rock quarry disciplinarian, and at age 15 he set out on an adventure. Later in life he would settle in Chicago and meet his cousin Balki Bartokomous, depicted in the late 1980s and early 90s TV show Perfect Strangers. Having already amassed a wealth of muscular endurance, Larry sought to reunite with his ancestry, a nefarious tribe of underwater symphonic bubble clerics.

Little did Larry know that since the Holocene Epoch and the retirement of his kinsmen, abnormally large saltwater platypuses invaded the leagues under the sea nearest the traditional (ergo flooded) amphitheater. Amphibians theorize the failure of this fresh industry lies with shoddy tile work near the stinky tectonic fault-lines next to the seating area on the upper platform from seats 6D to 14A.

Once Larry made peace with his new watery platy-denizens, he was able to adapt to the new plastic tuba he inherited from his cyborg caregivers. Everyone knows the bubble clerics make use of maltodextrin catapult splendor sticks rather than traditional audible performances by corresponding terrestrial musicians. Plastic tuba or no, the spectating crowd found out exactly why Larry's tribe retired immediately after the underwater auditorium was built in the mid 1490s. Soon thereafter Larry's life became slightly less dramatic. Disappointed with his lack of groove, he moved to Chicago to the beat of a different drum.

Super annoying. I wrote this Gort Card title on a post-it yesterday because the word beleaguerment had been in my mind. When it came time to write the title, I added an extra e to make beleaguerement (because I don't know how to spell). Though the original drawing has the writo, I fixed it digitally after scanning it in. Since there isn't much connection between the drawing and the title, perhaps the platypus' name is Willard. In addition, leagues under the sea relates to beleaguerment.