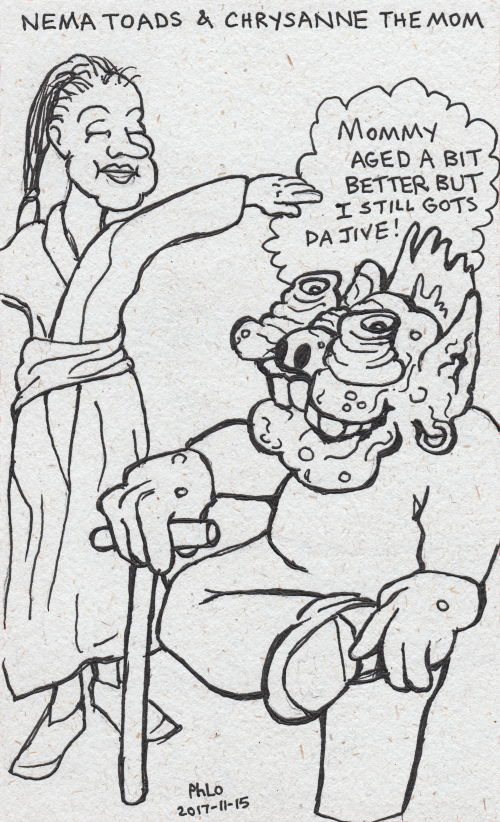 It's not like I'm going to make a drawing a day, but since I have momentum from yesterday why not continue?

Once again this Gort Card has a connection between the title and the drawing, though many do not. Nema Toads the troll is the elderly chap on the right. His mother Chrysanne, an immortal Ljósálfr, dances in conjunction with invisible waves emanating from living psionic crystals.

Everyone except for Nema knows Chrys adopted him. Nema's parents accidentally dropped him as a wee child while traveling brashly through the forest, and he wandered too far away from the path to be recovered. Chrys watched the situation closely, took pity on Nema, and raised him as her own. Because of her otherwise solitary and greatly extended lifespan, she has adopted a variety of needy forest creatures over time.

Today I had the foresight to bring more art supplies in my backpack in case the mood to draw awakened after work. Again breaking slightly from Gort Card tradition, I drew in my hand-bound journal instead of on a detached card. This time I was more careful to draw a straight 3" x 5" rectangle as the boundary, using a Wendy's paper tray liner folded many times to become a rigid straight edge.