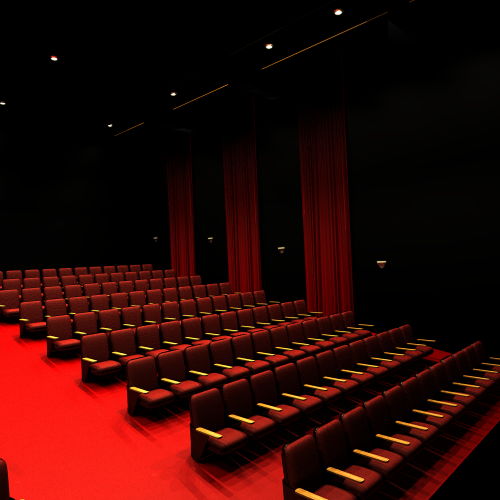 Back around when I graduated from high school I gave Mom a Christmas present, a drawing of whatever she wanted. Prior to that I drew a few nativity scenes for Grandma around Christmas, and Mom asked for a nativity scene with snowmen characters. She has a large snowman collection that she pulls out each year.

My vision was to model the entire scene in 3D. Instead of just a nativity scene, I wanted an all snowman cast performing a Christmas play in front of an all snowman audience in a theater. The title of the project was "Snowman's Dress Rehearsal."

Using Ray Dream Studio, the only 3D tool I had at the time, I began modeling the theater and some of the characters. There were two shepherds, a magi, Mary, Joseph, and some audience members. I never finished the scene, but I made a few renderings including this one showing the environment I built. Unfortunately I'll probably never finish the scene because Ray Dream Studio no longer installs in newer versions of Windows. I would have to create the whole thing again in Blender.