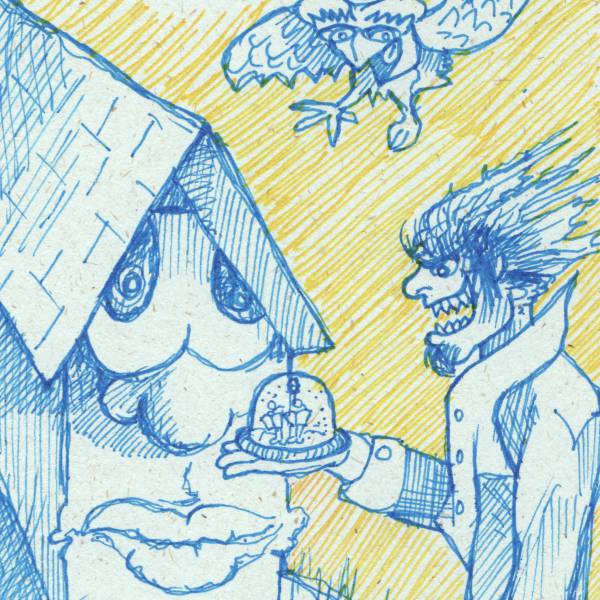 Let me try to explain the steps that resulted in Wolfy Caruthers. The story is potentially long, but I'll attempt to shorten it a little (or not).

A tradition of my childhood was to go out to dinner with my sister, parents and grandparents after church on Sundays. At the time we all went to the same church, so it made sense. Two restaurants I distinctly remember frequenting were Stewart Andersons and Old Country Buffet. Neither restaurant currently exists in its original form. Steward Andersons became Black Angus, and most Old Country Buffets became a variety of other restaurants. Most of my Sunday memories were from OCB.

During these post church outings my sister and I had to figure out what to do for two or three hours while our parents and grandparents yapped on and on, since the conversations rarely included us. Back then there were no such things as smartphones (or cell phones really), and portable gaming systems were barely a thing if at all. Since I was a quiet and creative child, I often asked Mom if she had paper and a pen or pencil in her purse. She had just about everything in her purse, but maybe she made sure to have those things in there just for me (though she has always been a note-taker, so that explains the presence of such implements). So I would draw, and I don't remember what my sister did.

Occasionally people in the restaurant would notice I was drawing and stop to take a look. At that time I couldn't draw worth junk (and arguably still can't, but after years of doodling you learn a few things), but I would still get occasional compliments.

Even as a kid I liked to encourage or entertain people, so the idea developed that I could leave the drawings for the waitress, just to give her a smile. My challenge would be to finish the drawing before my parents and grandparents exhausted their chats, which usually wasn't much challenge for me. The drawing was left under a salt shaker or along with the tip my parents left on the table. Sometimes a Scripture verse was included on the back or simply the words &quot;for the waitress.&quot; Good memories. I haven't thought about this for a while. Muted memories returning.

This idea of passing drawings or cards continued into high school. A Christian bookstore in town sold "Pass it On Cards." The cards had an image or artistic text and an encouraging word or Scripture verse. I bought a ton of them because I thought they were cool. One year I intended to secretly insert them into the vents of other student's lockers if I noticed they needed cheer or encouragement. It was a nice idea, but it only happened a few times before I lost my nerve. I might have also warped my pure intentions once by thinking a cute girl needed more encouragement than others in true need!

As far as I know no one discovered me though, so it was fun to be a bit of a Robin Hood character for a short while.

A bunch of years later we reach today. Most of the time when I try to make people smile or feel encouraged, it's indirectly a bit selfish. My own life lacks satisfaction and meaningful connections, and in order to alleviate that misery I try to be nice to others in a small and coy way (limited by my extreme introversion). When someone smiles or feels better from my efforts, I also feel better... as if I have achieved at least some tiny purpose in the universe.

Right now my life feels like a big pile of sucky garbage even though I have no right to complain. Compared to suffering people in the world I am blessed with relative provisional stability, enough to eat, and all those basic things we Americans take for granted. I'm just not happy anymore. I'm lonely, and it feels like God slams all doors in my face. But that's another long, unrelated sob story that no one can tolerate hearing.

One of the few redeeming things in my life today is the freedom to be silly with my coworkers. When all else is unhappy and empty, I can enjoy temporary happiness laughing with other people. Of course I don't take credit for it all either. They seem to have a similar goal in mind, and we all benefit from mutual silliness. We never see each other because we work in separate offices. To keep sane I chat with them here and there throughout the day. We keep an open channel, and if there is silence for too long usually one of us will chime in. It's not enough jibber jabber to lower productivity. People in the same office typically chat more and get less done than we do with our occasional chats. Without this communication my life would be a very dark vacuum in vast empty space, and there's no way I could continue in it. Therefore chatting boosts my productivity and morale big time. 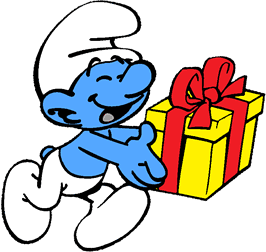 One of my very intentional goals in communicating with my teammates is to build feelings of camaraderie and confidence between us. From my perspective this was something previously lacking somewhat (though I'm the new guy, so maybe they had been doing it all along). Since I'm pretty broken to pieces inside these days I don't have any eternal words of wisdom or comfort to offer anyone, but I hope my jokey smurf side can still be of use. No, I don't play pranks like offer exploding gift boxes. Rather my goal is to make people explode into laughter and smiles, or at least ease moments of boredom for everyone. I honestly don't know why I'm here in this world, in this city, in this company. All the things I thought my life was supposed to be about are 3972% kaput. While I still have life in this aging body, my one tiny purpose is to find at least one person to bring cheer to.

Almost every day my social and comical limits are stretched to the max, and I'm constantly on the verge of running out of ideas to talk about. I'm an introvert, and communication of any kind is a struggle for me. Writing definitely comes more naturally for me, and I've always had pen pals of some variety. In person I'm very dull and without words unless I have known someone for many years and feel at ease around them.

Today one of the girls point blank asked "Tell me a joke. Please!" I can only remember one other time in my life when asked such a thing point blank. This will always stump me because I don't even know one joke! Some of my uncles seem to have whole joke books memorized. Pastors feel the need to deliver several jokes before getting into the meat of their sermons.

Then there's me. Though a goofy joker at heart, there's not even one joke in my vocabulary. Telling jokes feels like cheating, taking credit for someone else's "art." And then there's the risk that everyone has already heard the joke. Then what good is it? It's why I like puns I guess. They result from creative manipulation of "fuel words" in natural conversation. The primary challenge of puns is to calculate and deliver them before the moment passes. Stuff like "A nun, an Italian and a moose walk into a bar..." or "Why did the chicken cross..." or "Knock knock..." are not my thing.

In desperation I tried to think of a joke in response to my coworker's request. Nada in my skull! Peter Pan suddenly came to mind, so I tried to brainstorm a wordplay concerning him walking into a bar. Still nothing. It annoyed me that I couldn't deliver my chum out of her boring moment, so I simply chatted about whatever came to mind.

As I drove home from work and on to Wendy's for dinner, suddenly an idea! Aside from my virtual friendships, the only significant face-to-face connection I have with other humans occurs at restaurants as I develop rapport with the employees who recognize me. Suddenly the memories of drawings for waitresses flooded back to my mind. I might not be able to memorize or manufacture jokes, but I can draw stupid junk!

Then fall Gort Cards. Together with this idea of silly drawings came the memory of another recent goal. A few weeks ago I created and populated a new gallery for my website: Gort Cards. All the art already existed in other galleries, but there are enough unique features of Gort Cards to pool them together.

Without getting into a lengthy history of Gort Cards, I will summarize what they are about. My high school friends and I drew nonsensical things on 3" x 5" index cards in the early 90s. That's pretty much it. There's a far richer history, but I've already written that story somewhere. The basic "rule" of Gort Cards is that they are drawn on a 3" x 5" card. Generally speaking there is a title that often has no perceivable connection to the drawing. There might be a discernible message to the drawing, but usually they make no sense at all.

I haven't drawn a Gort Card in years. In fact, I haven't drawn much of anything in a very long time. Even though the Gort Card gallery was ready to launch some time ago, I refused to activate it without a new drawing. Something I put off until today!

Ricocheting rock to injure several fowl (not including the bird in the drawing)...